Make sure you don’t miss out! Click the image below to take you to the Box Office. 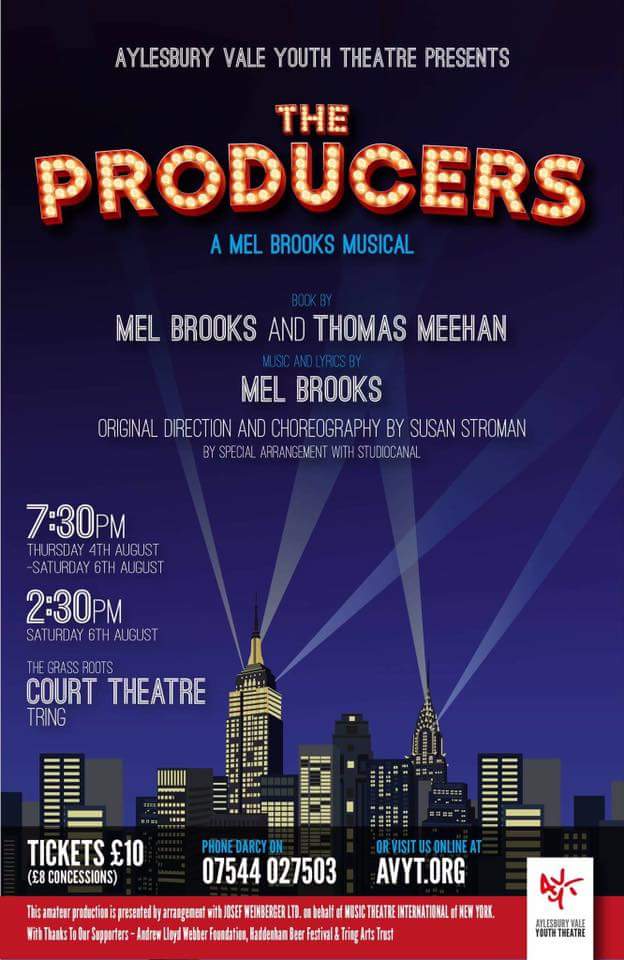 We’ve been a bit quiet on our social media over the weekend and I thought i’d just take a mo’ to explain why.

On Friday, we had what’s called our ‘stumble run’ going through the entire show from start to finish with the actors. Quite a feat considering we only started rehearsing 4 days before! We have also had 3 get together’s of our brilliant band to go over the music together and get used to their parts.

On Saturday the cast spent the morning singing at Tesco’s in Tring, entertaining the morning shoppers and handing out some flyers. The afternoon was spent with dance rehearsals and costume fittings.

Yesterday (Sunday), was an important one, whilst the cast had a much needed rest day, the crew and production team went to the Theatre to start to set up the space. This involved arranging all costume in the dressing rooms, getting the rigging down and new lights up, constructing the set, painting (a lot of painting!), getting the sound and lighting desks up and running and maybe the eating of a few doughnuts in there just to keep us going.

We’ll share some pictures with you soon, but for now we’re trying to keep it a surprise from the cast so shhhh!

Every year it amazes me that this bunch of young people can be so professional and knowledgeable and innovative when working in the theatre, if there’s a problem we’ll stop, think about it, come up with a solution and suddenly the hive of activity is back up and running.

Today is the day when everything really starts to come together, the cast are working in the theatre from now on, the technical and stage crews working with and around them and then you throw the backstage team, band and front of house team in there as the week goes on and it all becomes a well-oiled machine.

We can’t wait for opening night! Just give us a few days to finish everything off first!

As we enter Day 2 or Rehearsals for our summer show ‘The Producers’; our Stage Manager – Charlotte Dukes-  gives you an insight into what it’s like working behind the scenes…

“Hi, my name is Charlotte and I am really excited to be stage manager for AVYT’s 10th year musical, ‘The Producers’. As stage manager, my role is to source props, find stage crew and manage the running of the show.

My preparations for the show began a few months ago. I started off by reading the script and meeting with the rest of the production team to discuss ideas and requirements for the show. Leading up to rehearsals, my main focus has been to source and make props. I have also been working with other departments (e.g. Costume and technical) to help provide some of the things on my list and the cast have also kindly donated some items.

I really enjoy rehearsals, where I  bring all of the props that I have gathered so far and take notes on all aspects of the show, such as where props are set and the changing of the set itself (which is all very exciting and currently top secret!

If, like Charlotte, you want to get involved we are still looking for stage hands to help behind the scenes. Send us a message to info@avt.org or on the contact form here for more info.

This year has certainly been a busy one so far for AVYT!

2016 sees us celebrating our 10th Birthday and as such there has been lots of activity going on to help us see this year through with style.

For a start, we have launched this new website which should make it easier for us to keep you updated with what’s going on this summer.

This year has also seen a series of successful activity. In February we put on our second ever Improvised Comedy Show ‘Standard Delivery’, which saw a brave team of 5 stand up in front of an audience, unscripted and unplanned, playing a series of comedy games with suggestions from our audience. It was thoroughly enjoyed by all who participated and thanks to the Aylesbury Rugby club for hosting and to Tom Geggus – the mastermind behind AVYT’s Improvised Comedy Troupe, (email info@avyt.org if you’re interested).

Next, we held Auditions for our Summer Show, The Producers. This year’s auditions saw a wealth of new talent join the company and updates for The Producers will be appearing on this page shortly.

In May we held our Annual Variety Show, where members were able to perform an act of their choice to friends and family. We have a range of acts with some comedy, lots of solos and group numbers, some dance and music. We raise over £200 towards our summer show.

In June, a small group performed at Hyde Heath Primary School Fete, an adaptation of Lewis Carroll’s classic, we put our own spin on things and performed ‘Alex in Wonderland’. The British sunshine held out and allowed us to perform al-fresco and it was a very fun afternoon.

Just last weekend, we held a Fundraising Quiz night, again raising over £200 towards The Producers.

Thanks all for your support so far, we’ll be introducing the team behind ‘The Producers to you all shortly and, as ever, if you’re interested in joining AVYT please do get in touch using the contact form here or info@avyt.org.

Stay tuned for updates to come on our upcoming shows for this year.
While you wait, have a look at our previous shows, here!